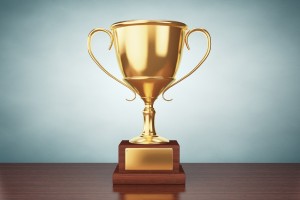 Donald Trump adored Roy Cohn. The pugilistic litigator lent a lot of his style to the caricature that Trump became. Bombastic, bullying, lying, and most importantly, unwilling to let the law get in the way of a harassment suit — Cohn’s strategic vision is all over Trump’s business history. Ultimately, NY disbarred Cohn. Since then, Trump has searched for his new Roy.

Along the way he’s attracted some less-than savory lawyers to his banner. Folks with dubious legal credentials flock to Trump like moths to flame. But this competition wasn’t (mostly) about those lawyers. This competition focused on the lawyers who brought real careers and real legal bona fides to the Trump cause and watched that legal standing melt under the hot lights of Fox News hits.

In some cases quite literally.

And now it’s down to two: 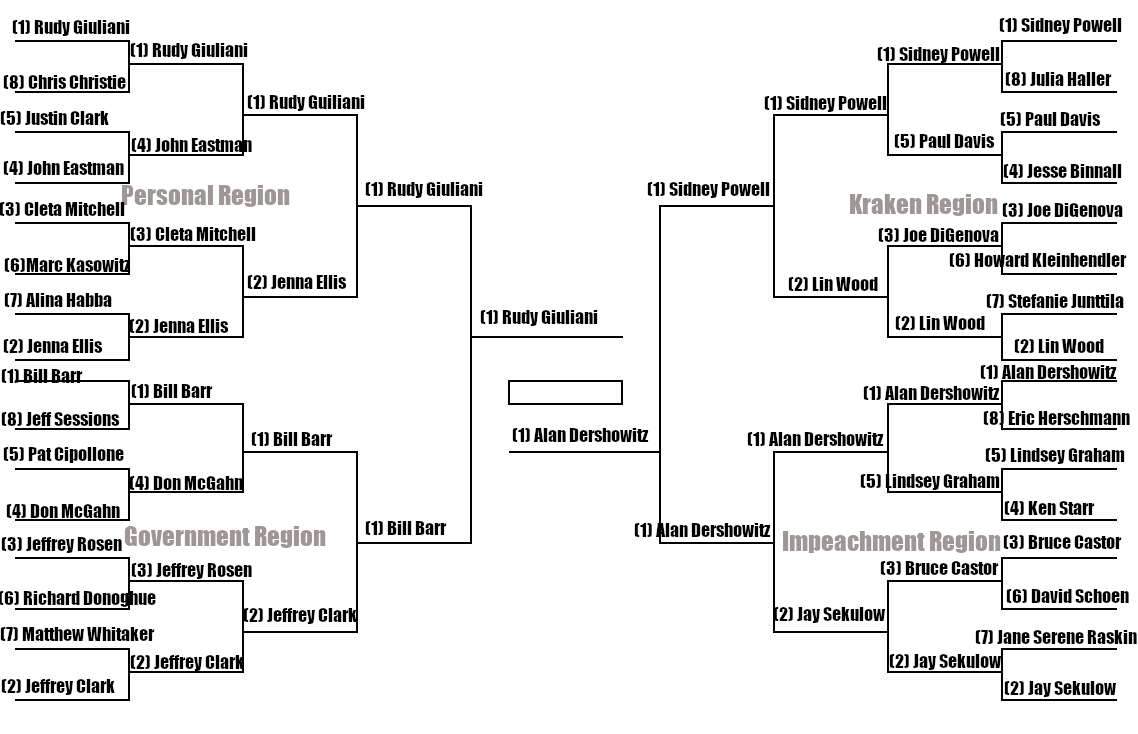 Yet this matchup might fulfill the spirit of the competition better than any other final pairing. Rudy Giuliani was always a ghoul, but he was a ghoul with a teflon cloak from the media that allowed him to play the role of a “reasonable” Republican. The rest of the country lapped up the idea of a vaguely socially liberal GOP candidate replacing peep shows with Lion King: The Musical. Unfortunately for Giuliani, the more the country heard from the one-time presidential heir apparent, the more they hated him.

Still, Giuliani hitched his wagon to Bracewell and could’ve settled into a lucrative private practice life. That didn’t work out and he went to Greenberg Traurig. Greenberg tossed him when it became clear that Rudy transformed into a Trumpian Black Hole determined to drag everyone around him to their professional doom. Now Rudy’s been stiffed by Trump, crushed by his own legal fees stemming from a criminal investigation into his Ukraine activities, and doing Cameos to make extra scratch.

For decades, Alan Dershowitz was America’s image of a law professor. Dershowitz joined Harvard Law as its youngest ever professor in 1964, after completing his SCOTUS clerkship. Law professors rarely become household names, but for most of Dershowitz’s tenure he embodied the role of public legal intellectual.

He inserted himself into celebrity cases from Leona Helmsley to O.J. Simpson. When he wasn’t in the thick of a newsworthy case, he was on TV walking the public through the courtroom drama. He even represented… oof, Jeffrey Epstein, who Dershowitz thinks should have gotten an even better deal. Maybe he shouldn’t have inserted himself into that one.

They even made a movie about his representation of Claus von Bülow. Ron Silver played him. Ron Silver was a lifelong Democrat who decided to go fringe right for George W. Bush. Maybe a little of life imitating art here as Dershowitz has taken his liberal credibility and fashioned it into an umbrella for Trump and right-wing news outlets to duck under while proclaiming their reasonability. He represented Trump in the first impeachment — the one about obstruction and extorting Zelensky by withholding weapons shipments, which seems like a much bigger deal right now, doesn’t it? Dershowitz spent that impeachment channeling Richard Nixon claiming that nothing a president does is illegal if it’s done to get re-elected. Now he’s representing Mike Lindell. It’s hard to imagine a scenario where he represents anyone outside the Trump wingnut orbit again.

One was tucking in his shirt. The other wore underwear the whole time. Now they’re facing off to crown which one is the face of the damage Trump did to the legal profession’s always tenuous good name.

Polls are open through Sunday night. We’ll announce the results on Monday. Get voting!