Jenkins and Commissioner J.J. Koch, who are both involved in the suit, left the courtroom while the other three commissioners discussed the item.

Price said he supported the payment because the court had previously voted to give Jenkins emergency powers to control the pandemic. The suit, Price said, was filed to protect that authority from the governor’s executive orders.

However, he said he believed that any member of the court — including Jenkins — should have consulted with the rest of the members before filing legal action in their official capacity. Jenkins, he said, did not when he sued Abbott.

“It’s important that the judge understands… it’s not a decision he can make and make alone,” Price said. “We are doing ti in the best interest of the public and public health.”

Daniel also said the fact that the money was going to support staff — not the lead lawyers arguing the case — made it an easier for the court to approve.

The measure passed in a 3-0 vote without Jenkins or Koch.

Original post: Dallas County commissioners will again consider a proposal to pay legal bills from a suit between County Judge Clay Jenkins and Gov. Greg Abbott at their meeting Tuesday.

This time, the check would come from the county’s general fund, not a COVID-19 charity.

Jenkins and Commissioner J.J. Koch, who are both involved in the suit, were not part of closed discussions in the last meeting, when Jenkins asked the court to accept a payment from the county’s COVID-19 relief fund, operated by the Communities Foundation of Texas. Commissioners John Wiley Price, Elba Garcia and Theresa Daniel tabled the proposal after discussing it with the county’s lawyers. 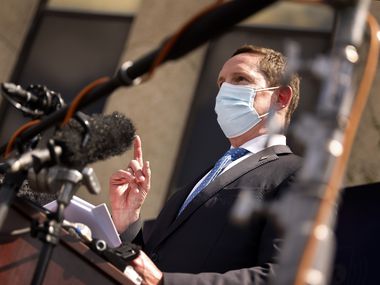 The bill comes from the firm of Alexander Dubose Jefferson, which has led the appeals process in Jenkins’ suit. Doug Alexander, the lead attorney from that firm on Jenkins’ case, said he is working pro bono but that the bill is for work done by others at his firm.

The suit, still awaiting a ruling from the Texas Supreme Court, started when Koch sued Jenkins for requiring masks at a commissioners court meeting in August. Jenkins in turn sued Abbott for his ban on mask mandates in the state, saying it limited his ability to respond to an emergency as allowed in the Texas Disaster Act.

Price said the payment had been previously discussed in closed sessions of the court, but that their meeting earlier this month was the first time they’d seen a proposal to pay it with the charitable funds. Alexander and Jenkins both said they thought the payment was an appropriate use of those funds.

The fund’s purpose was initially broad, Jenkins said, and official documents governing the fund say it can be used “to provide funding for the Dallas County needs for responding to the COVID-19 pandemic.” Since it was established in 2020, it has been used to pay for hand sanitizer for first responders, PPE for small businesses and meals at Parkland’s trauma ward.

Jenkins and Alexander suggested that because the suit was filed to protect Dallas County residents during the delta and omicron waves of the pandemic, the legal bill would fit under that broad definition.

The new proposal to instead use the county’s general fund leans on the argument that Jenkins was acting in his official capacity as county judge in “preserving and defending the authority of the local presiding officer of Dallas County, a political subdivision, to declare and manage a local state of disaster.”

“This dispute between the Dallas County Judge and the Texas Governor is anything but a personal dispute; rather there are important legal and community interests at stake,” the proposal reads. “Judge Jenkins’ efforts in the Dallas County lawsuit and the resulting appellate proceedings have operated to save lives of Dallas County residents and to mitigate critical hospitals and other healthcare providers from being overwhelmed due to COVID19 surges.”

The proposal would allow payment to the firm not to exceed $250,000. If approved, it would also approve continued representation from Alexander Dubose Jefferson in the ongoing litigation.