RACTOPAMINE RULING:
The Constitutional Court said in its judgement that local jurisdictions must not contradict or exceed the authority of the central government

The court cited articles of the Constitution and the Act Governing Food Safety and Sanitation (食品安全衛生管理法) in its sixth judgement this year, affirming the authority of the central government to insist that food safety regulations be followed and to direct the nation’s trade policy.

The local city councils of Taipei, Taoyuan, Taichung, Chiayi County and Tainan appealed to the court over the central government order after they adopted a “zero tolerance” policy toward ractopamine residue in US pork imports. 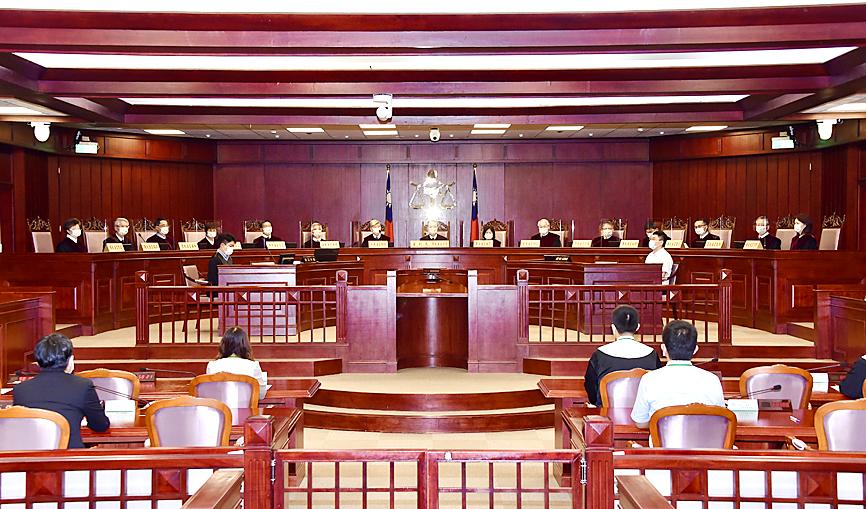 The administration of President Tsai Ing-wen (蔡英文) in August 2020 said that Taiwan would allow imports of pork containing ractopamine residue, with the order taking effect on Jan. 1 last year.

The Executive Yuan on Dec. 31, 2020, announced that local government bans on imported pork containing ractopamine were in contravention of the central government’s authority and were invalided when the import restrictions were lifted.

The Chinese Nationalist Party (KMT) at the time pledged to help local governments to seek a constitutional ruling on the legality of the central government’s move to invalidate local ractopamine bans.

Article 15 of the act stipulates that the central government has the authority to place restrictions on processing and preparation of raw materials and edible parts for food use, Hsu said.

Article 18-1 stipulates that “businesses in food processing and its raw materials … shall conform to safety, sanitation and quality standards … as prescribed by the central authority,” while Article 21 sets out the requirements for “review and approval by the central authority,” including health risk assessments for food manufacturing, processing, input of additives, preparation, packaging, import and export of food products, and registration and permit requirements, he said.

Moreover, Article 107 of the Constitution stipulates that the central government has the power of legislation and administration of foreign trade policy in the section delineating the “powers between central and local governments,” he added.

The Constitution’s Article 118 stipulates that “self-government of municipalities comes under the direct jurisdiction of the Executive Yuan,” so local jurisdictions must not contradict or exceed the powers of the central government, he said.

The hierarchy of authority is a series of concentric circles, with village and township authorities in the middle, county and city bodies encircling them — as they have a greater degree of self-government ability — while the central government is the national authority encircling all the others, Hsu said.

“Local ordinances are constrained by the central government’s powers, as legislative statues and the Constitution stipulate,” Hsu said.

The KMT expressed regret over the ruling, which it said would harm the intent of the self-governing framework for local governments, who make decisions that are in the best interests of their local constituents.

“We once again would like to condemn the central government for opening the door to imports of pork products containing ractopamine,” the party said. “This move has endangered the health and food safety of Taiwanese.”

Government agencies would work with local governments on this matter to ensure food safety and to safeguard the health of everyone in Taiwan in accordance with international standards and based on scientific evidence, Executive Yuan spokesman Lo Ping-cheng (羅秉成) said.

Comments will be moderated. Keep comments relevant to the article. Remarks containing abusive and obscene language, personal attacks of any kind or promotion will be removed and the user banned. Final decision will be at the discretion of the Taipei Times.