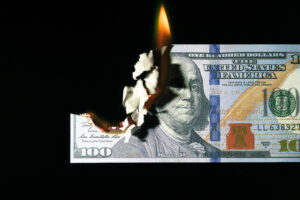 Does anyone else remember the early aughts TV show “Ed”? The conceit was that the titular lawyer’s NYC life fell apart (lost his job and wife cheated on him) so he headed back to his hometown and high school crush. Anyway, the big mistake that got Ed fired was putting a comma in the wrong place, costing his firm $1.6 million dollars.

See, Barclays filed a 2019 shelf registration statement with the Securities and Exchange Commission allowing them to sell $20,081,600,000 in securities. Unfortunately, they sold more — a lot more — than that.

So, how’d this happen? Well, Bloomberg’s Matt Levin has a theory (officially, Barclays is conducting an investigation):

Ideally you’d KEEP TRACK OF HOW MUCH YOU ISSUE, and subtract each issuance from the $20.1 billion you started with, and when that $20.1 billion gets down to, you know, $2 billion, you file another shelf registration statement with the SEC saying “we might do another $20 billion of stuff.” And that new shelf registration is quickly approved by the SEC, 1 and nobody thinks too much about it, and then you can sell $20 billion more stuff, and the numbers are all arbitrary and this is all administrative.

And if you just forget — if some junior person in the internal legal team leaves, and forgets to pass along the “shelfcapacityleft_07.xls” spreadsheet to her successor, and it stops being updated — then, uh. Then, at first, nothing happens. No bell rings. The SEC doesn’t call you up to be like “I see you are selling securities illegally.” (They don’t really keep track either.) The buyers of these notes don’t notice: You are still (you think) doing shelf takedowns; you are still writing pricing supplements describing the new notes and filing them with the SEC. The buyers have access to all the information they would have had if you had filed a new shelf; nobody is harmed by any of this. You just keep bopping along as though everything was fine, and then one day a new junior analyst starts on the legal team and finds the “shelfcapacityleft_07.xls” spreadsheet in a folder and asks the vice president “hey what is this,” and the VP looks, and she realizes what it is, and they check the math 20 times because it seems too horrible to be true, and then they all leave for the bar at noon because it is not a fixable error and they will miss each other when they’re all fired tomorrow.

“It looks like an operational or legal failure,” said Jerome Legras, managing partner at Axiom Alternative Investments, a fund that specializes in bank debt. “It’s hard to believe they would do such a stupid thing. This honestly is the first time I’ve heard of something like this.”

Not a great look, and made worse given the rather Draconian SEC rules. Barclays sold securities without a valid registration statement for almost a year, so they have to offer to buy back the securities. Which is expected to cost them ~$600 million.

See, this is why good lawyers are worth their expensive price tag.

Kathryn Rubino is a Senior Editor at Above the Law, host of The Jabot podcast, and co-host of Thinking Like A Lawyer. AtL tipsters are the best, so please connect with her. Feel free to email her with any tips, questions, or comments and follow her on Twitter (@Kathryn1).