In order to increase access to the law, both attorneys and non-attorneys need to strive to open up the legal system by obtaining and sharing data related to the law, and inspire others to do the same, a panel of experts said at an American Bar Association event on Thursday. 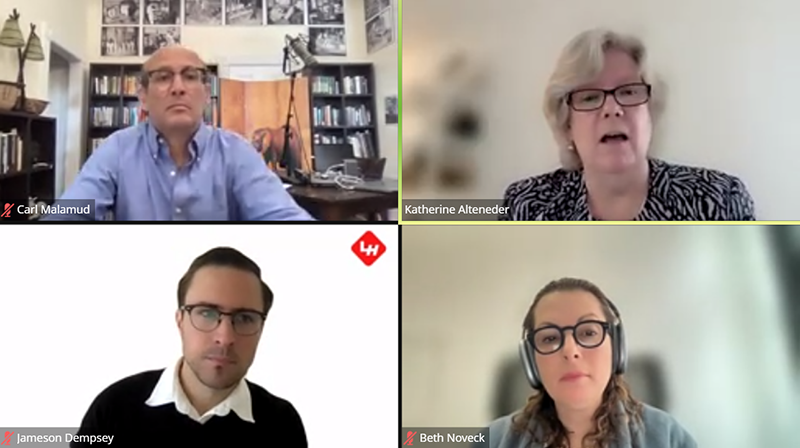 The online forum was the sixth event held in the Redesigning Legal Speaker Series and featured Katherine Alteneder, a self-represented litigant advocate; Carl Malamud, a technologist and public domain advocate; and Beth Simone Noveck, a professor at Northeastern University who advocates for open government.

The panel, which was moderated by Legal Hackers board member Jameson Dempsey, explored issues related to increasing the access to law and expanding resources interacting with the court systems. In addition to the ABA, it was sponsored by the Institute for the Advancement of the American Legal System at the University of Denver and Legal Hackers.

One of the main focuses of the discussion was data, and how obtaining data, such as jury rules and patents, from the courts and related agencies and then publishing it for public view can advance the law and the public’s understanding.

These technology-driven initiatives are often called “legal hacking,” which is defined as developing solutions for issues at the intersection of law and technology. Jameson’s group, Legal Hackers, is a global collective of lawyers, policymakers, technologists and academics who explore these matters.

Malamud, who relies on public access laws such as the Freedom of Information Act to obtain documents, said that sharing data online allows for more people to study it, but that “how you apply that to our system of justice is the real challenge for us.”

“One of the reasons you open up the underlying data is that people like Katherine, Beth and others can go in and analyze the workings of our courts and come back with specific recommendations on things that could be made better, or easier or different,” he said,

As an example, Malamud pointed to an analysis of state court dockets studying pro se litigants in credit default matters that showed that the service of process was inadequate in many cases.

Even the most routine court matters have barriers, Alteneder said.

“People across America still do not have access to a plain-language complaint for divorce in every jurisdiction,” she said. “This is the most basic thing.”

All the panelists agreed that the job of furthering access to the law does not just fall on attorneys.

“Each time I put a big government database online, like the Securities and Exchange Commission or patents, what I hear is that ordinary people don’t need this stuff, only patent attorneys need the patent database,” Malamud said.

He disagreed, though, and said he believes the key to changing the regulatory system is making regulations more broadly available, and the key to making the courts more accessible is continuing to study the barriers surrounding it. These are big undertakings, he acknowledged.

“The more people involved is how we make the system more responsive to more people,” he said.

Each of the panelists has contributed to expanding accessibility to the law.

Malamud, founder and president of the foundation Public.Resource.Org, which collects public domain materials and publishes them online for free, was responsible for developing the first internet radio show and for putting the SEC’s EDGAR database online.

Alteneder joined the Alaska court system in 2001 to develop and launch a statewide family law self-help center, which became the nation’s first virtual self-help center. She later was executive director of the Self-Represented Litigation Network, which brings together lawyers, judges and other professionals working on expanding access to the courts for self-represented litigants.

Noveck directs of several open government initiatives, such as Northwestern’s Burnes Family Center for Global Impact, the Governance Lab and MacArthur Research Network on Opening Governance. From 2009 to 2011, she was the deputy chief technology officer for open government under President Barack Obama and led his Open Government Initiative, which aimed to increase transparency in the government through technology.

Although there may be many different approaches to obtaining data and sharing it for public consumption, all the panelists concurred that pursuing a project without first understanding the underlying principles can be dangerous.

“You can create an app,” Alteneder said, “but if the underlying document is not actually simple and not actually simplifying processes, it’s just going to add complexities and reinforce this false tension between lawyers and technology that somehow technology is eliminating business for lawyers.”

“Having that discipline to know how to effectively solve problems rather than chasing the next bright, shiny object is extraordinarily important,” Noveck said.

That’s where training and education come into play, she said.

To further this goal, Noveck has provided free classes online to help teach people how to achieve a greater open government, including a 12-week course she hosted based on her book “Solving Public Problems.”

In addition to education, it’s also important to show reluctant people “how opening the law — or opening up the law or opening data about the law — helps solve problems for them.”

Everyone interacts with the law, Malamud said, and expanding access to the law “isn’t just a ‘bar thing’ — this is about our society.”

Alteneder said the rule of law can be embracing, it doesn’t have to be subduing.

“I think that is a really important distinction for us to keep in mind as we move forward,” she said. “Empowerment, not oppression.”

In the spirit of transparency and providing educational resources for free, the ABA and its partners will publish a recording of the forum for anyone to view on the website of the Institute for the Advancement of the American Legal System at the University of Denver.